The AGED GARLIC EXTRACT or ELIXIR can be used as a proudct that everyone should use over the afe of 30-35, which it strengthens the immune system and protects the body against diseases.

The history of the AGED GARLIC EXTRACT is based on the formulas of famous physicians such as Luqman the Wise in the Holy Books and Ibn-i Sina’s books (Avicenna) whic studied in Europe for 200 years as medical books.It is reported that the Luqman Wise is made the potion which he found centuries ago known as the ‘AMBROSIA’

The most important feature of our mixture is that quality and price of the garlic, which has been waiting at least 48 months, inereases over the years.

The mixture which is known as AGED GARLIC EXTRACT in Europe and US made by distillation in alcohol and has been proven to benefical by conducting clinical studies on it. But we make the mixture without using any additives, active substance and alcohol. Only ingredients are garlic, apple vinegar, lemon and water. Then the mixture is fermented and aged in special conditions to make product ready and perfect.

AGED GARLIC EXTRACT is effective and helpful in diseases such as vascular occlusion, hypertension, cholesteroland triglycerides.

Keeping the mixture on special conditions and allowing it to aging; soften the taste and this prevents it from harming the stomach and intestines. Aging process protective molecules for liver and at the same time increases the value of the product.

And the one of the most important feature of the product is; it does not leave breathe odor. 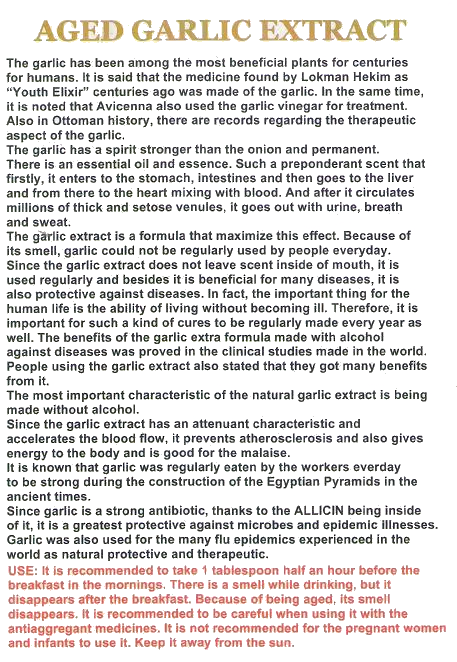 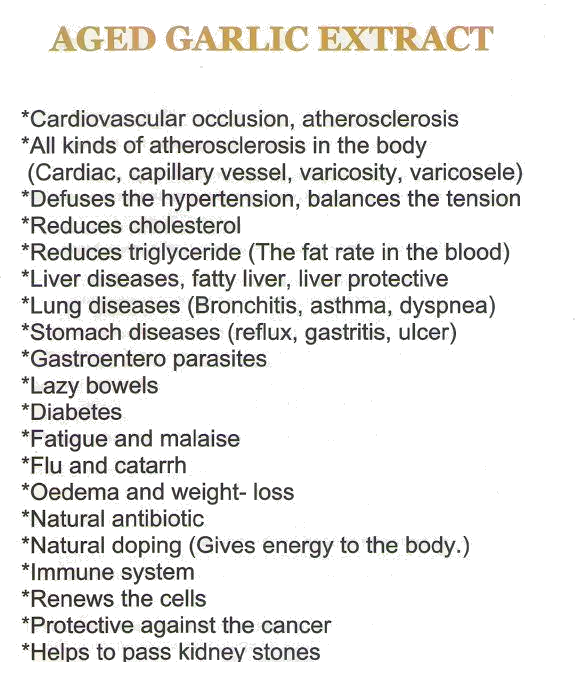